One of my daughter's favorite books is "The Dot" by Peter H. Reynolds. My wife and I read this to her at least once a week and it’s usually upon her request. That is a pleasure to us both, because this book is so much more than a children’s story. 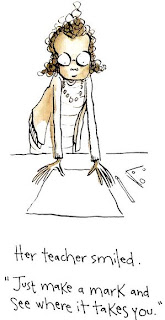 The book urges the reader to “make a mark and see where it takes you.” Maybe that message isn’t clear to a 2 year old, but it certainly resonated with me. As a child, I was a big-time day-dreamer. I wanted to be a guitar-playing baseball all-star who fought fires in outer space during the off-season (I didn’t grasp the implausibility of that until much later). When I was a little older, in high school, I wanted to be the President. Then in college, I was going to be screenwriter and maybe even an actor. With all of those dreams, I did little to turn them into a reality.

Most kids have lofty aspirations for their future, so it isn’t surprising that 10-year-old me didn’t begin NASA training. I also did nothing to improve my baseball skills other than attending the requisite little league practices and games. I had a pitch-back and family members that I could have asked for help with batting and fielding, but I didn’t employ them. I didn’t buy a guitar until I was 24.

High school me wanted to be President because I was on the Student Council and liked organizing community events and being part of the leadership team. Beyond that, I did little to expand my ability to debate, speak publicly or network with others. Those are all essential for a successful career in politics. I went to college with that dream, but other than taking a few poli-sci courses, I did nothing additional.

College and post-college me really wanted to work in TV. I even moved to California and had an internship at a talent management company. I read a ton of screenplays and even wrote one. But I never did the hard part and that was get the script out to people. I was in the nexus of Hollywood entertainment, yet I was too afraid to share my work.

In the years since, I have held onto that dream of being a writer – to craft a story and transport it from my mind onto paper. It’s not a coincidence that I started re-applying myself in early 2012, when we started regularly reading “The Dot” to my daughter. I decided to make another mark. I began outlining a story about a boy and his surreal existence. Every day I would make sure I did something to progress that mark a little further. Where did it take me? I handed over a finished draft of my first novel to an editor in December of 2012, which I later published in January. I illustrated two children’s books. Then I wrote two more shorter stories which are building up to a second novel.

Every grand work of art, music or piece of writing has to begin somewhere. Don’t be afraid to make a mark and let it bring you places. If you do something every day to make your vision develop, imagine what it will look like in 365 days.

Seefer Elliot and the World Aside Ours: Free Promotion

From March 21st through 25th, you can download Seefer Elliot and the World Aside Ours for free to you Kindle or Kindle Reader. 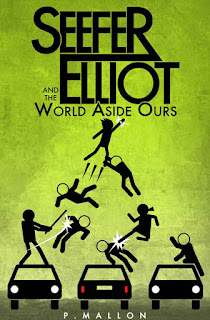 If you do happen to download and read it, please tell the world your thoughts in the comments. Reader reviews are the best way you can help promote your favorite books or authors and all it takes is 20 words or so. :)
Posted by Unknown at 10:24 AM No comments: 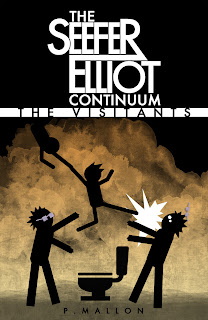 As the bus pulled into the front driveway of Buchanan Middle School, Seefer beheld his new stomping ground. Buchanan was the original high school in Camden. Over the years, as population grew, new buildings (like Harrison) were built to cater to the expanding student body. Buchanan became one of the town’s two middle schools. Now with Harrison in disrepair, the building would be seeing its most crowded days in decades.
Seefer filed out with the others onto the sidewalk leading to the school. He took a refreshing breath as he looked around.
Cassy sidled up next to him. “Good to be back?”
“Strangely, yes.”
“Come. I will show you where to go.”
As the pair neared the building, Seefer noticed its age. Weathered bricks comprised its walls. Each window was made of thin glass and each pane was in desperate need of a paint job. Ivy grew up the front face of the building and nearly reached the top. The school dated itself with telltale signs of World War II architecture. Despite its old appearance, Seefer regarded it as fresh and new in his mind. Anything beats one more day of home schooling.
Upon entering the main foyer, Cassy navigated down a narrow hallway. Buchanan was much more claustrophobic than the wide-open design of Harrison. Hundreds of displaced students magnified that feeling. After Cassy led the way through the crowded corridor, she presented Seefer with the entrance to the main office.
“Here you go. You better check in,” she said with a giggle.
“Why are you laughing? You’re leaving?” Seefer asked.
“I have homeroom, Seef!” she said while walking away.
“Mr. Elliot! So good to see you again," a familiar voice called out. Seefer cringed as he turned around. Standing in the doorway was the old chatterbox himself, Principal Witik.”
“Principal Witik?”
“No, not anymore. It’s just Mr. Witik now. This school already had a principal, but there are perks to being the Dean of Students. I get have a lot more one-on-ones with the kids.”
“You must enjoy that.” You know, chewing everyone’s ear off.
“I do, it’s great. I’m very fortunate to have any job really. I did invite a madman into our last school.”
“It could have happened anywhere.” As long as I ‘m attending there.
Witik had a folder in his hands and gave it a pat. “Well, that’s all in the past. You are officially enrolled here, Seefer Elliot. Would you like to see your homeroom?”
“Sure.”
The school bell sounded, indicating the start of the school day. As students filed into classrooms to begin their homeroom period, Witik escorted Seefer to his new class.
“You will like it here. Some students had to enter entirely new school systems, but you will at least be staying with us in Camden.” Seefer nodded along, but didn’t have any thoughts to add. Witik continued with the small talk. “Unfortunately, it isn’t all good news. There are now ten more students in each class, rooms that were dedicated to art and music are used for regular courses, and everything is in disarray because we don’t have the supplies to handle this many students.”
“The Buchanan students who were here prior to our arrival have been very welcoming to the new kids. Some of us from Harrison had been pretty shaken by those events, but we were all treated with the proper respect. How have you been handling the circumstances?”
Seefer shrugged his shoulders. “Okay, I guess.”
“It’s okay if you feel out of place. We all do. Many students have approached me with fears of another incident happening again. They felt helpless from the last one. Why wouldn’t you? All of our memories were taken!”
Seefer nervously laughed. “That’s so right.”
“We are asking students to help us out as much as possible, so we can help in return. Do not make extra work for your teachers. Cooperate. Help your fellow students. The incident at Harrison didn’t just affect the students there. It affected the entire community. Now we have to act like a community.
“I may have let everyone down as principal, but I’ll be danged if I’m not the best possible dean of students this town has ever had.”
This little speech was not like Witik’s other long-winded rants about his teaching glory days. His words resonated with Seefer. Witik seemed burdened with a sense of failure from what happened to the old school. He sounded like a man trying to reconcile for those failures.
“I will do my best, Princ-, er, Mr. Witik.” Seefer said.
“Very good, young man. With that, here is your locker assignment.” He handed him a note card with the locker number and combination. “And I present to you, your homeroom.” Witik raised his arm with an open hand toward room 117. Seefer peaked in through the window. “You’ll be happy to see some familiar faces from your Harrison homeroom.”
Seefer looked. The sight of Cassy sitting by the window brought him immediate delight. As he scanned the room, he found Jona, Victoria and Sally. Then any happiness he had flushed away as he laid eyes upon Hector’s mug sitting in the middle of the classroom, right next to the only empty seat. You have to be kidding me!
“Oh, how nice.” Seefer said with a worrisome frown.
Just before he turned to walk away, Mr. Witik smiled and said, “Happy first day at Buchanan, Mr. Elliot.”
Posted by Unknown at 10:18 AM No comments: