Hi blogmates,
Seefer Elliot Continuum: Perpetuation is free this weekend (5/18 thru 5/19) on Amazon. Could you please take a minute of your time to download this ebook for free (you do not need a Kindle to do so, just an Amazon account)? And if you have two minutes, could you please leave a kind review?

This is the second "Seefer Elliot" title, and the first in the second volume of novelettes. If you are looking for a fast, funny and exciting read this weekend, take a look.
Thanks!
Posted by Unknown at 5:16 AM No comments: 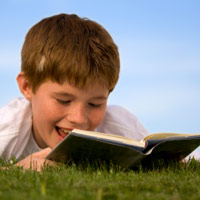 I have an all-new appreciation for the human mind as I’m experiencing the joys of reading through my son’s eyes. As adults we may forget the difficulty that the English language poses when we try to feel out a new word. Some words can go in a dozen different ways when trying to pronounce them. When you come across a “c”,  you are never sure that it is a soft “c” or a hard “c” until you try it both ways. You have to guess whether an “h” or “e” is silent. And what the hell is the point of the “gh” in “tight”, “light”, and so on?
This process of connecting the sounds that we hear in spoken English with letters or groups of letters in written English is called phonics. In my opinion, “phonics” is a term that was invented because they didn’t want to called the process “fucked up bullshit.”
Before you write and say, “English is an amalgamation of many other languages and different rules apply depending on their origin.” Ok. Fine. That’s why it is the way it is now. But why should it continue this way? “That’s the way it’s always been,” has never been a good excuse to not explore changing something for the better (I’m looking at you, electoral college).
I am no scientist nor did I do any research on this, but I am going to make the bold assumption that your brain wastes tiny amounts of energy running down its lists of exceptions when trying to figure out a word like, “physician.” Is that pahisikian? No. You have to remember that “ph” makes an “f” sound. You have to remember that “y” in this instance makes a short “i” sound. And then you have to just know that “cian” is pronounced shun. Crazy. Why can’t it just be spelled “fizzishun”?
If all words were spelled phonetically, we could spend less time learning English in school and more time learning other subjects that can enhance our children’s knowledge before they are cast off into the world. More math, science and history. Hurrah! Or perhaps implement a second language earlier in life? Most Americans don’t begin learning a second language in school until 7th or 8th grade (and that’s in a good school system). One thing that can be learned from other languages is how phonetic they are. In Russian, they have a 33 character alphabet. Each letter has its own unique sound and there are specific rules to each. There are very few exceptions. In English, there are 143,987 exceptions (estimate).
What if we assigned letters to sounds and just stuck with it no matter what the word?
Bonus: How exciting would it be to see an alphabet poster that has a nice 7×4 grid and all the squares are populated? I hate seeing two extra spaces that are filled in with silly things like apples, schools, or happy children.
With change, some new rules need to be established…
Obviously, I’m no linguist and I’m sure any English major would laugh at the mere suggestion of upheaving our “beautiful” language for such nonsense. Purists will be sad to see the introduction of new letters and the disappearance of homonyms. Not-yet-realized problems also might occur when you don’t have three different spellings of “to”, “two” and “too”. But with practice and ingenuity (“to”, “2″ and “also”), I think it would pay off for our future generations.
Now let’s give it a whirl:
Mii naam iz Pat. Ii doon’t ekspekt tω caanj θe wirld wiθ mii nω sistem, but Ii hoop tω raaz awaarnes tω θe problems ov owr komplikaated langwej. OK? Eet sum beens and fart in pees.
Ow. My brain. Must remember. It’s for the children.
Posted by Unknown at 8:04 PM 3 comments:

Taking a break to write some poetry...