"Blink and they will all be gone."

I originally posted the following short story on r/nosleep:

It had me where it wanted, delivering its final test, or perhaps threat. “Blink and they will all be gone. Everyone you love. Everyone you care for. Stripped from your mind like they were never there.”

The following minutes were agonizing, feeling like an eternity. My eyes twitched repeatedly as I unnaturally pried them open. They streamed tears of both pain and misery, but soon those tears ran dry and dust began collecting. That’s when the burning started, like hot irons singeing my corneas. Despite the suffering, I cried out, “I must keep them open.” But I knew I wouldn’t be able to do this forever.

Soon, I regrettably freed my eyelids from their pry and let my lashes engage. Moisture returned. The pain ceased – not just the searing of my eyes, but the sadness within. I suddenly realized its plan was flawed. I raised my head with a cocky grin to let it know that it should have chosen someone, unlike me, who actually had others to love.

For whatever reason, it simply returned the very same grin.

Posted by Unknown at 7:59 AM No comments:

My Encounter With The Paranormal or Photos From A Crappy Film Roll (Union Cemetery, 1997)

I am not a practicing ghost geek or anything, but my interests in the subject are piqued from time to time. I am in the midst of researching and outlining an idea for a novel and that has had me delving into the world of the paranormal. I met the acquaintance of a paranormal investigator. I watched the Conjuring. I've read up on just about every haunted place in New England. It also caused me to dig through some old boxes looking for an old packet of photos.

You see, back in 1997, some friends and I went to Union Cemetery (driven by curiosity given to us by the famous Warrens). Allegedly, the cemetery is haunted by a spirit dubbed, "The White Lady." During the Warrens' presentation, they showed some video and there was "evidence" of a spirit strolling through the tombstones. It then turned and headed right for the camera.

In hindsight, the video was pretty fishy. My memory doesn't serve me well as to the production value of it. It was the 90s, so it probably wouldn't hold up well if it were a dupe. I have never seen it posted on their website, YouTube or any place else. In fact, my brother saw the same show just a few years later, and they removed the video from the act. For them to have such "concrete evidence" (as they put it) and not share it with the world made me skeptical.

Well immediately following the show, I wasn't as skeptical. I think it was a Friday night show. So by the next night, I wanted to see the damn thing for myself. So those friends and I went there and took a bunch of pictures and rolled a video camera while there. The video didn't show anything special, but the pictures were, to my surprise, interesting.

Per the instructions, we loaded the film camera on site and used up all of the 24 frames. I had it developed at Walmart, unfortunately, so you will see some developing errors and cropping inadequacies that I will point out in the captions: 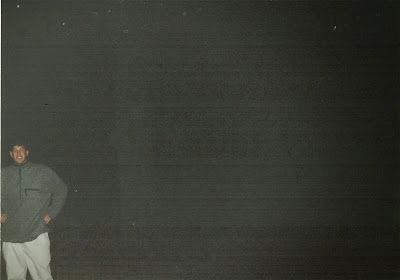 1. My friend with some white "ghost globules" above his head. 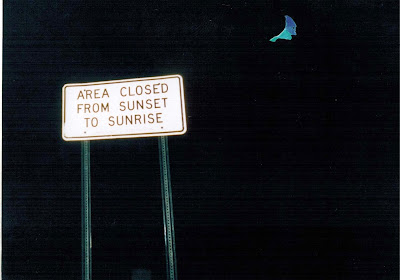 2. The sign at the cemetery's entrance. The mark appears to be a mark left by the film development. 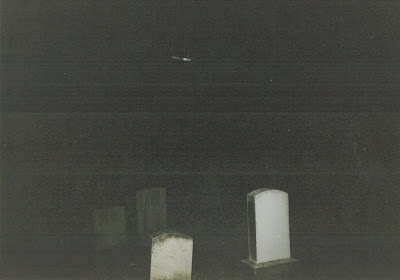 3. Some tombs. Something appears above them. 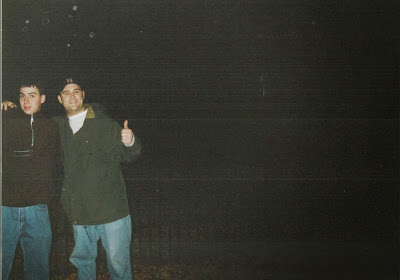 4. Two friends with those ghost globules above them. (Bad cropping courtesy of Wal-mart) 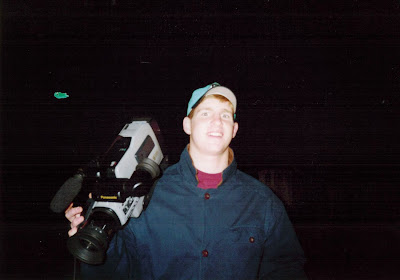 5. Me with no ghost globules. [sigh] (at least I am accompanied by another film developing error) 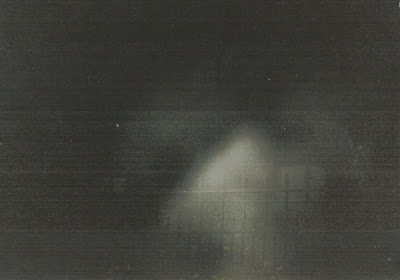 6. Okay. When I picked up the photos and started thumbing through, I came to this picture. I had chills. It could be fog. It could be a spirit. None of us remember fog that night. Look at pic #3. Looked clear there. 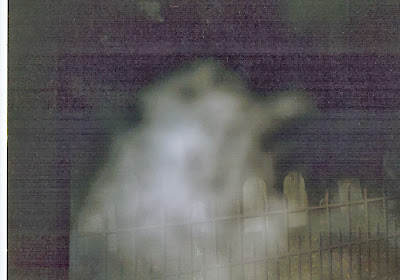 7. Then I got to this photo and nearly shit a brick. It looks like it came right up to us! Eek! (Bad cropping courtesy of Wal-mart)

With my naked eyes, I saw nothing. The video camera picked up nothing. But these pictures definitely had me wondering.

1) The local police did drive by at one point, but left us alone. We never went into the cemetery, we only stood outside of it. Maybe the rules have changed, but they were cool with us as long as we didn't go in.

2) One of those friends of mine got bored at one point. He decided it would be fun to taunt the White Lady. He yelled out "show yourself, you white bitch!" That friend went on to have recurring nightmares of the white lady for as long as I knew him. I don't know if some repressed fear of a curse got the better of him, or the White Lady made him pay for calling her a name. Or it was possible he made it all up to be a dick. I guess I won't ever know for sure, but it was a good little epilogue to our trip.

So what do you think? Dust or ghost globules? Fog or the White Lady?

Posted by Unknown at 7:41 AM No comments: